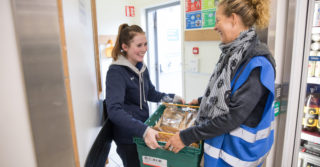 AIB has been working with FoodCloud since it introduced its new community programme ‘AIB Together’ in 2018. Delivering social impact is a key pillar of the AIB Together programme and as part of the programme, each AIB employee is entitled to two volunteering days per year. Employees can volunteer with their chosen charity and, to

Over the last few editions of CSR News Ireland we had the opportunity to learn about AIB’s sustainability practices: from their overall achievements, to looking at how they integrate sustainability into their supply chain. Here we’ll learn how they achieved targets in waste, water, energy and transport, engaging employees along the process. Waste Management A

AIB: Embedding Sustainability in products, supply chain and with their customers

AIB recently won the Green Large Organisation of the Year award for a wide range of initiatives and its integrated sustainability. As part of AIB overall business, they are focused on lending in the Energy Sector. AIB have a dedicated Energy Finance Team and an Energy Efficiency Lending Fund which allows energy savings to be

AIB are a long established organisation and their 200 branches across Ireland mean that their impact on the environment has a wide reaching effect and this is something they take very seriously. AIB are active in every sector of green business and they are embracing best practice to drive business value, both internally and externally.