In July 2016, the Government launched a major initiative in response to the Mulvey report for Dublin’s North East Inner City (NEIC) to oversee the long-term social and economic regeneration of the area. A programme office was established to work on the project.

All students attended workshops in BITCI to assist them in preparing for their placements. Students began their placements in July and worked for either 6 or 8 weeks. BITCI evaluated the programme when the placements were completed, gathering feedback from both the students and the companies. 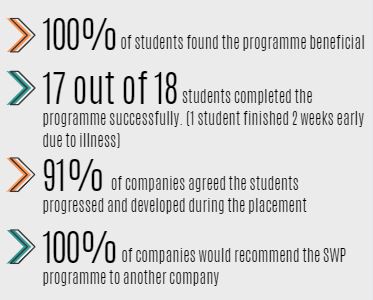 “The programme ran very smoothly from the start. It was clear that a lot of work went into organising this programme and making sure it would be manageable from the get go.”

“The student was very enthusiastic and diligent in their work. They have been a great asset to the Marketing team and their work ethic is to be commended.”

“The student had a fantastic personality and attitude, and we believe they made a tangible difference in the office and particularly the experience of other interns working with us during his time.”

“Now I know what I am capable of doing, I can do anything if I am really determined. The programme taught me that.”

“Within those 8 weeks I built many skills with the help of my team and it’ll be something forever beneficial and something I will be forever grateful for.”