60 companies in Ireland contributed over €30 million and 264,735 hours to charities and community groups in 2018 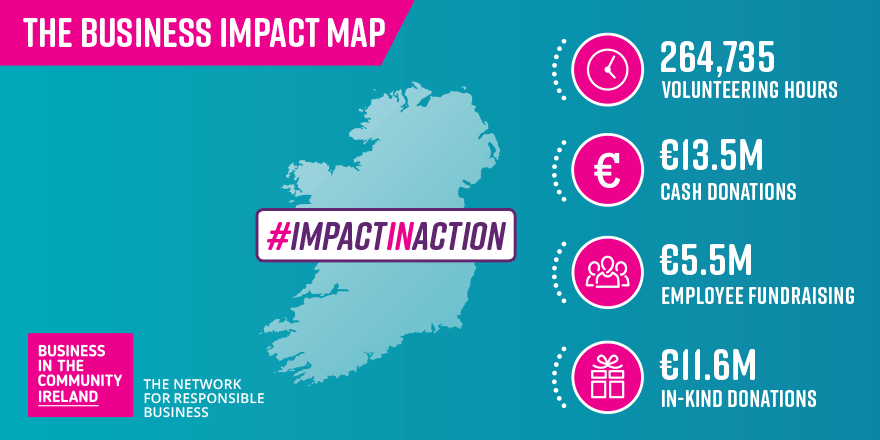 This data was captured by Business in the Community Ireland (BITCI), a business network that advises Ireland’s top companies on corporate social responsibility and sustainability. The data is featured on an online ‘Business Impact Map’ which gives a breakdown of how 60 companies and their employees supported local community groups and charities during 2018.

The Business Impact Map shows that over €13.5 million was given in cash donations; €11.7 million was contributed through in-kind donations and over €5.5 million was raised through employee fundraising. Employees also volunteered over 264,735 hours to local groups and projects during the year.

Tomás Sercovich, Business in the Community Ireland Chief Executive said, “Employees want to work for companies that encourage volunteering as part of everyday business and crucially want to work where their values align with their employer. Companies understand the critical value of engaging in tackling social issues; it is a fundamental sustainability challenge. Employee engagement is a critical tool to attract and retain the best talent as employees now expect their employers to have a community strategy in place as standard”.

Irish customers are also taking note. According to the Edelman Trust Barometer results which were announced in February of this year, 70% of Irish respondents agreed with the statement: “A company can take specific actions that both increase profits and improve the economic and social conditions in the communities where it operates.”

Sercovich concluded, “This year, we want to focus on the impact of corporate community involvement and recently launched The Inclusive Employer, a blueprint for social inclusion as we believe business must play a key role in supporting the employment and employability of marginalised people. We encourage all companies in Ireland to focus their community outreach activities on education and employment.”

This year, for the first time, BITCI asked the companies to map their community support against the United Nation’s Sustainable Development Goals. These are often called the ‘to do’ list for the planet and many employees are asking companies how they are helping reach these goals.

The top 5 Goals supported by the companies in 2018 were Good Health and Wellbeing, Quality Education, Responsible Production and Consumption, Reduced Inequalities and Sustainable Cities and Communities.

The Business Impact Map was launched at an event today in the Lighthouse Cinema Dublin and was sponsored by Fujitsu.

Tony O’Malley, CEO of Fujitsu Ireland said, “Our partnership with BITCI is one we value hugely. Community involvement and development is at the heart of our business strategy, not just as a global tech company but as a people-centric Irish business. As illustrated in today’s findings, when done correctly, CSR has a tangible impact on solving the many universal problems facing local communities and society at large.

Employees need to feel that they are empowered by the work that they do to positively impact the world around them. In turn, there is an onus on employers to provide a platform and opportunities for this to happen. That is a growing part of what a Responsible Business is about.”

View the Business Impact Map and their the many impact stories from our member companies.

For further information, contact Moira Horgan, Head of Marketing on mhorgan@bitc.ie or 086 172 2105