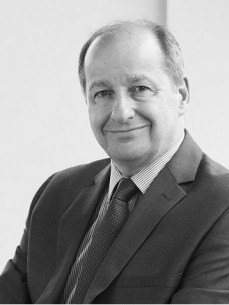 Chris Martin is the CEO of Musgrave Group, Ireland’s largest grocery and food distributor. Founded in Cork in 1876, in 2016 Musgrave celebrates 140 years in family business, supporting thousands of other family businesses.

Musgrave partners with over 1,451 independent retailers throughout the Island of Ireland and Spain. Almost 45,000 people work either directly for Musgrave or in one of the stores associated with the brands, 35,000 of whom are in Ireland – making the company Ireland’s largest private employer.

Under Chris’ direction, the business has focused strongly on partnering with entrepreneurial retailers to grow and develop retail and wholesale brands. SuperValu, Centra, MarketPlace and Daybreak are all in the number one market leading position in their respective industry categories.

Prior to joining Musgrave, Chris had developed a strong and lengthy retail career including CEO of Mothercare plc, Group Finance Director of Storehouse plc and various roles in ASDA and Pizza Hut.

An economics graduate of Newcastle University, he is a member of the Institute of Chartered Accountants in England and Wales.