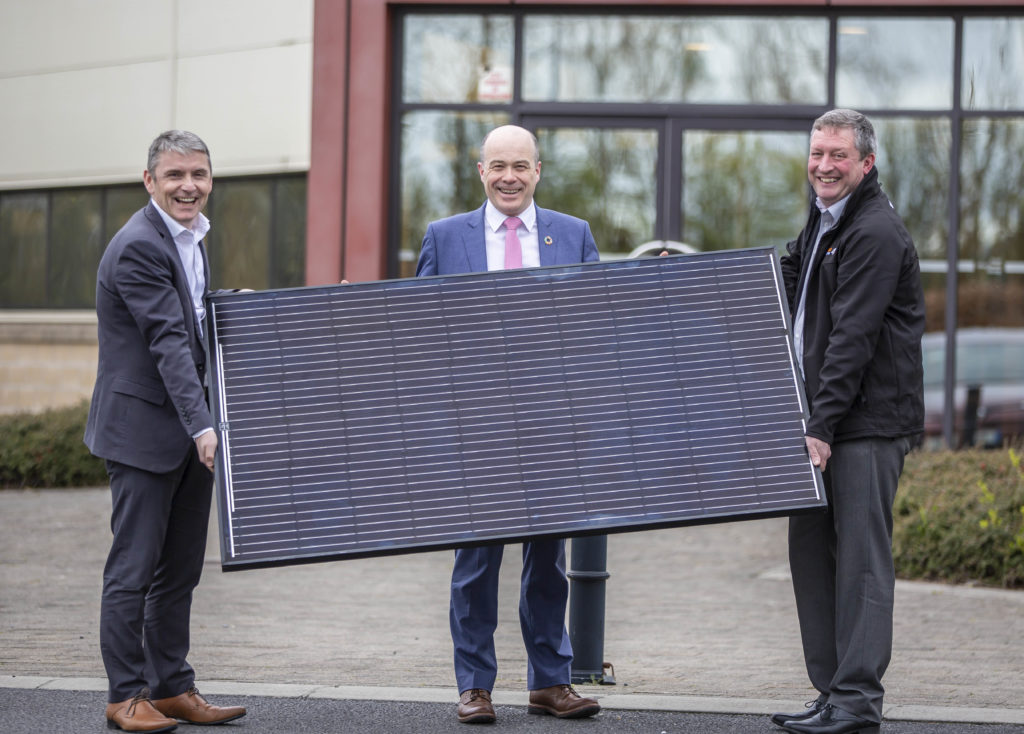 In a major demonstration of support for the shift to green energy by business, Heat Merchants Group has installed over 470 solar photovoltaic (PV) panels on the roof of its business support offices and central distribution hub in Athlone. The installation covers 835m2 of roof area and is expected to generate over 85% of the company’s electrical energy demand at the site.

The new Solar PV installation will generate up to 150kWp of renewable power and will reduce consumption from the grid by approximately 120,000 kWh per annum, thereby preventing approximately 63,480kg of harmful carbon dioxide (CO2) from being released to the environment.

“Ireland has huge potential for renewable energy. Currently 30% of our electricity generation comes from renewable sources. We are now committing to 70% by 2030. All sectors will have to transform themselves if they are to thrive in a decarbonised society. Early movers, like Heat Merchants, will seize the enterprise opportunities in a low carbon economy. We need more sectors to take up the challenge, developing clusters promoting best practice in their sector.”

Commenting, former Climate Action Minister and local TD, Denis Naughten said: “Micro generation is an incredibly exciting space that will allow citizens in local communities to generate their own electricity and contribute towards Ireland’s climate action targets. As we move towards a smarter grid, and a market that rewards increased participation of individuals and businesses, projects such as this will help us to define the best pathway to a lower carbon future.”

“In making this major investment and commitment to renewable energy we want to show by example that Solar PV technology can deliver a return on investment for both commercial and domestic installers and make a real impact in reducing carbon emissions. I believe that it is the responsibility of industry leaders like Heat Merchants Group to lead by example in adopting green technologies which allow us reduce carbon emissions while also providing a long term return on our investment. At Heat Merchants, we offer an extensive range of renewable energy advice and solutions to retail customers and the trade to support them in making the shift to more sustainable sources of energy.”

A commercial installation at the scale of the Heat Merchants Solar PV installation at their Athlone HQ typically costs about €178,000. With €37,500 in financial supports under the Better Energy Communities Scheme the final cost would be in the region of €140,500. The 120,000kWh of electricity generated per annum is expected to deliver savings in energy costs of up to €427,000 over the next 20 years when adjusted for fuel inflation. Solar PV installations can also qualify for Accelerated Tax Capital Allowance administered by SEAI on behalf of the Dept. of Communications, Climate Action and the Environment which allow companies to deduct the full costs of equipment from their taxable profits in the same year of purchase. Heat Merchants Group promotes sustainable energy solutions for both domestic and commercial projects. Solar PV solutions are custom designed for both domestic and commercial applications and the recent announcement of a SEAI grant of up to €3,800 for the retrofit of solar PV into homes built before 2011 has generated huge interest in the market. Heat Merchants has also created a dedicated training facility at its Athlone HQ to demonstrate and train installers and customers in the available solar PV, energy storage and management technologies that are now coming on stream.

About Heat Merchants Group – Heat Merchants Group is a wholly Irish owned company trading as Heat Merchants and Tubs & Tiles. The group has 32 Heat Merchants branches and 12 Tubs & Tiles showrooms supported by a central warehouse and distribution hub based in Athlone. The Group’s business support services and technical design hub are based in offices in Athlone and Balbriggan. The company announced a €4 million expansion in 2018 which will increase the Heat Merchant Group’s branch network to 56 throughout the country and will increase its total workforce to 358. This will also see the addition of an extra 20,000 square feet of warehousing which will extend its capacity to service its expanded branch network.

The Low Carbon Pledge – The Business in the Community (BITC) Low Carbon Pledge is the first dedicated pledge generated by Irish business to set industry standards on sustainability and reduce carbon usage. The pledge is a commitment to invest time and resources into creating more sustainable business operations and commit to reducing their Scope 1 & 2 greenhouse gas emission intensity by 50% by 2030.