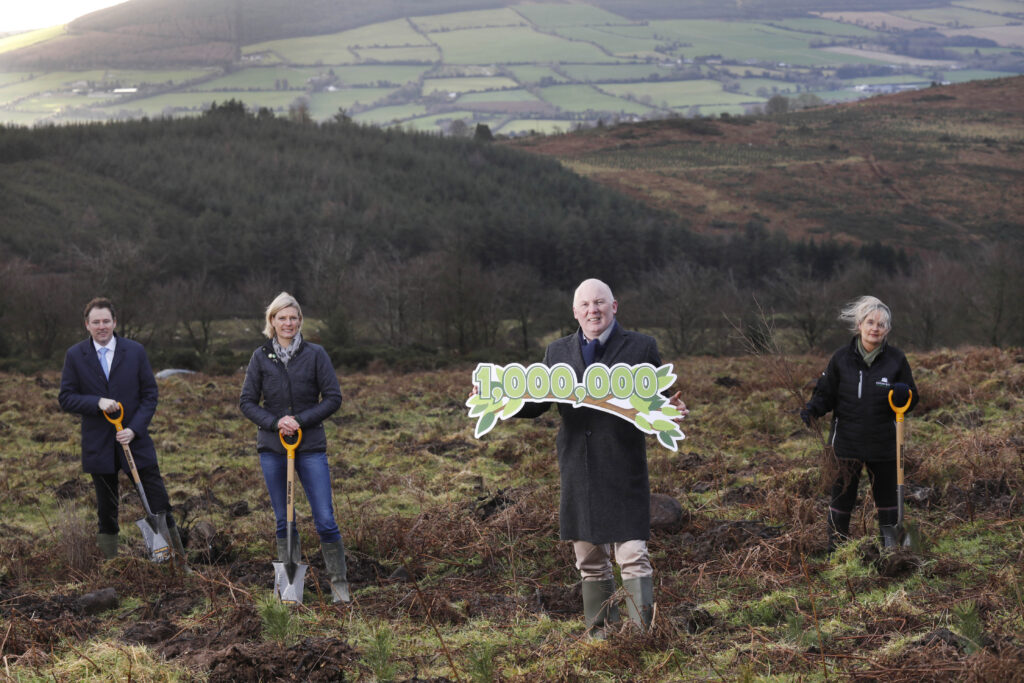 In January Aldi Ireland pledged to support the planting of 1 million native Irish woodland trees around Ireland over the next four years as part of its long-term commitment towards the environment. Aldi is the first retailer in Ireland to commit to this level of partnership with the Department of Agriculture’s Woodland Environment Fund (WEF), which is an initiative under which Irish businesses can partner with landowners and the Department to help create new native woodlands in Ireland.  It provides additional incentives to plant new native woodlands and supports the Government’s target to plant 22 million new trees a year until 2040.

Representatives from Aldi Ireland were joined by Minister for Agriculture, Food and the Marine Charlie McConalogue, and his colleague Minister-of-State Pippa Hackett to launch the new commitment at Aughrim, Co. Wicklow. Working in conjunction with Green Belt forestry consultancy, Aldi Group Managing Director Niall O’Connor and the Ministers pulled on their wellies and, with spades in hand, planted the first of what will end up as a total of 30,000 oak, birch and ash trees.

Planting the one million native trees will remove more than 160,000 tonnes of carbon emissions over a 100-year period. To put this in context, this equates to roughly 640 million kilometres driven by an average passenger vehicle (or the emissions from about 400 cars each year), 68 million litres of petrol consumed, or 20 billion smartphones charged, enough to charge all of Ireland’s smartphones almost 47 times over each year.

The native tree plantations will create a wildlife corridor for native species and enable grassland to revert to more natural vegetation, further enhancing biodiversity in the area.

Speaking at the event, Minister for Agriculture, Food and the Marine Charlie McConalogue TD said: “We have set ambitious targets as a country to plant 440 million trees by 2040, equating to 22 million native trees each year. Encouraging our native Irish biodiversity to flourish is highly important, and I am delighted to see a company such as Aldi supporting the Department of Agriculture-led Woodland Environment Fund. It is important that companies and individuals play their part in reducing the amount of carbon we emit, and I commend Aldi and the team for all their hard work.”

Commenting on the initiative, Niall O’Connor, Aldi Group Managing Director, said: “We are delighted to support the Government’s objective to plant 22 million trees annually each year until 2040. Aldi is committed to minimising the environmental impact of its business. We are targeting to plant 225,000 trees a year for the next four years which forms part of our wider sustainability strategy.”

Minister Hackett added:  “As Minister responsible for Forestry, I am delighted to see Aldi interact with our Woodland Environment Fund. It’s one which demonstrates the best of public private partnership, as it offers firms the opportunity to top up payments to farmers and landowners who commit to Department funded forestry.”

Aldi Ireland and Aldi UK have been carbon neutral since January 1st 2019. Over the past year, Aldi has introduced a number of initiatives as part of its long-term commitments towards sustainability and the environment, including being the first retailer in Ireland to successfully trial traceability technology to increase sustainability credentials across wild-caught fresh fish. To date, Aldi has removed more than 616 tonnes of plastic from its 145 Irish stores, replaced over 870 tonnes of unrecyclable material with recyclable alternatives and removed 500 tonnes of packaging from its core ranges.

Sustainability is also ingrained in the design of Aldi’s stores as seen in its Project Fresh store programme. Under the €60 million investment programme, stores will be powered by 100% green electricity. Aldi has invested heavily in improving its energy management systems and its entire store network is now powered by 100% wind generated energy. Aldi also achieved ISO 50001 accreditation in recognition of its efforts to improve energy efficiencies.

Transport is a key area of the Climate Action Plan 2021 and targets set out aim to reduce emissions from this sector by up to 51% by 2030. Emissions in the transport sector have risen rapidly in recent decades and remain coupled to economic growth. As one of Ireland’s largest businesses, Dublin Bus recognises that it has

Together, building and construction are responsible for 39% of all carbon emissions in the world and therefore represent a must-win decarbonisation segment both globally and locally. Cairn Homes want to take a prominent role in promoting sustainable and attainable building in Ireland, while in parallel being respectful of the change this will have on both suppliers and