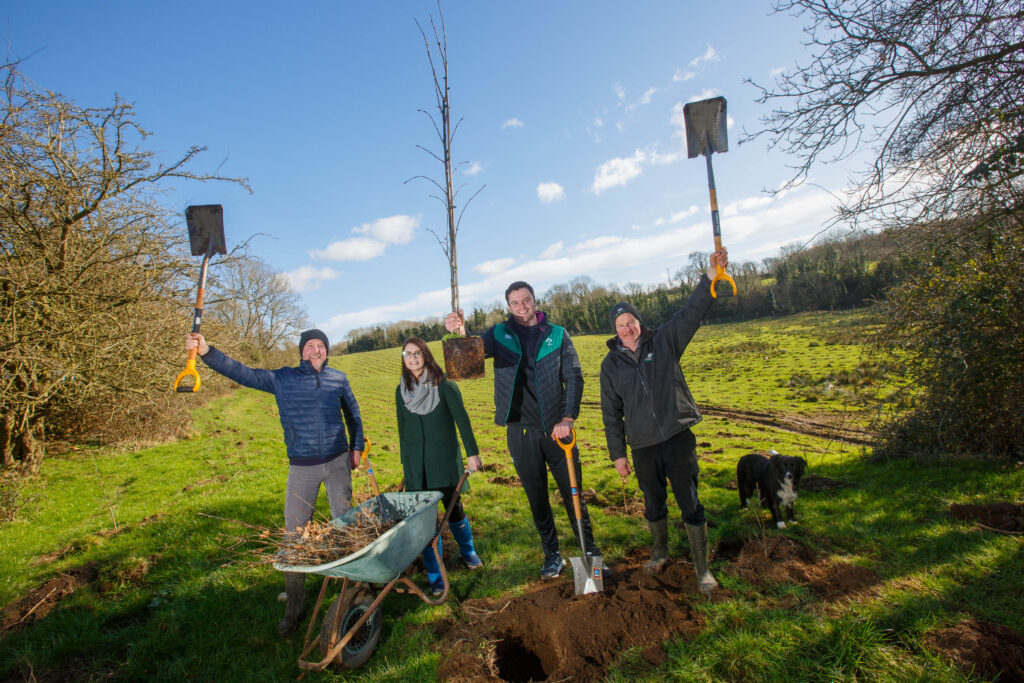 Aldi Ireland celebrated planting its 400,000th native Irish woodland tree with Irish rugby player James Ryan in Kill, Co. Kildare, meaning Aldi is now well ahead of its annual target. It marks a major milestone for Aldi, as part of its commitment to plant 1 million native trees around Ireland by 2025, together with Green Belt forestry consultancy.

The tree planting took place ahead of International Day of Forests on March 21st, the international celebration which aims to raise awareness of the importance of all types of forests.

Planting 1 million trees will see more than 160,000 tonnes of carbon emissions removed from the atmosphere over a 100-year period. To put this in context, this equates to roughly 640 million kilometres driven by an average passenger vehicle (or the emissions from about 400 cars each year), 68 million litres of petrol consumed, or 20 billion smartphones charged, enough to charge all of Ireland’s smartphones almost 47 times over each year. The native tree plantations create a wildlife corridor for native species and enable grassland to revert to more natural vegetation, further enhancing biodiversity in the local area.

The initiative is in partnership with the Department of Agriculture’s Woodland Environment Fund (WEF) under which Irish businesses can partner with landowners and the department to establish new native woodlands – as opposed to non-native species such as sitka spruce. The Government’s target is to plant 22 million trees a year until 2040.

To date, trees have been planted across nine counties in Ireland, including Kerry, Cork, Galway, Mayo, Meath, Kildare, Wicklow, Cavan and Limerick. The trees will create a wildlife corridor for native species and enable grassland to revert to more natural vegetation and enhance biodiversity.

Speaking at the tree planting event, Irish Rugby player James Ryan said: “It’s fantastic that Aldi is supporting the environment and promoting local biodiversity through its tree planting commitment and I’m delighted to join the team here today in Kildare to mark the occasion. Planting 400,000 native Irish trees is a fantastic milestone, and it’s great to see Aldi is ahead of schedule in planting 1 million. We all have to play our part in reducing our carbon footprint and I commend the whole Aldi team for all their hard work.”

Sustainability is ingrained in Aldi Ireland’s ethos and it has been carbon neutral since January 1st, 2019. Aldi is always working with its Irish suppliers to introduce new, sustainable packaging solutions, which has resulted in over 2,150 tonnes of virgin plastic being removed from its entire store network. Aldi has also replaced over 930 tonnes of non-recyclable packaging materials with recyclable alternatives. In recognition of its ongoing efforts, Aldi was voted Ireland’s most sustainable supermarket by Irish shoppers in the 2021 Ireland RepTrak® Sustainability Index.