SSE Ireland is part of the Leader Stream, explore the benefits.

SSE Ireland is certified with the Business Working Responsibly Mark

We’re proud too to be making a difference to the future of Ireland’s energy supply. Since 2008 our parent company, the FTSE Top-50 listed SSE plc, has invested over €2 billion, or around €1 million a day, in growing our energy business here – creating jobs in Ireland, sustaining employment, driving competition and greening our economy.

In energy generation, we now own and operate 1836MW of generation capacity, of which almost 550MW is from renewable sources making SSE Airtricity the largest provider of wind power in Ireland. We’ve commissioned Ireland’s newest and one of its cleanest power plants – the 460MW CCGT (combined cycle gas turbine) power station at Great Island, Co. Wexford which can generate enough greener energy to power over half a million Irish homes. We’re also building the 169MW Galway Wind Park in partnership with Coillte – when completed it will become Ireland’s largest wind farm.

The green energy generated by SSE at its 25 wind farms across Ireland powers almost 300,000* Irish homes, significantly abating harmful Carbon Dioxide (CO2) emissions on the island by around 725,000* tonnes. Just over 60% of the electricity we supply is generated from renewable energy sources† – almost twice the All-Island average.

*Equivalent homes powered and CO2 abated calculations based on performance in 2014 of SSE Airtricity wind farms in Ireland.

† 60% renewable energy supply based on 2014 Fuel Mix Disclosure, published by the Commission for Energy Regulation, July 2015.

In the Republic of Ireland we offer: 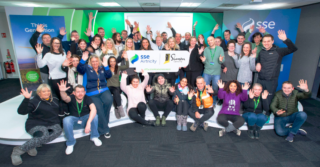 Overview of the Programme At SSE, we’re committed to doing the right thing and making a difference. That’s why in 2019, SSE Airtricity entered into a three-year partnership with the Simon Community in Ireland and Northern Ireland, supporting the charity in its mission to provide care, accommodation and support for people affected by homelessness. The